Join Us
Join Us

In light of the horrible road crashes that are occurring across the country killing people by the thousands, eminent citizens and road accident victims have sent an open letter to the Prime Minister appealing to him to make road safety a national priority and ensure the passage of the Motor Vehicles Amendment Bill 2017 during the upcoming session, which seeks to strengthen the laws regarding road safety. The Bill has been languishing in the Parliament for almost two years.

The letter reminds the Prime Minister that over 1.5 lakh road traffic fatalities occur year after year, with more than 5 lakh injuries, many of them disabled for life. Road safety shows no sign of improvement despite the matter being closely monitored by the Supreme Court. While the Minister for Road Transport and Highways, Shri Gadkari has often made a personal commitment to the issue of road safety, the Ministry has failed to push the Bill through the Parliament where it first faced roadblocks in the Lok Sabha and now the Rajya Sabha. The country will also miss the goal of reducing road traffic injury and death by 50% by 2020 set in the Brasilia Declaration, to which India is a signatory.
The road safety community has consistently stressed that road safety is not about blaming the drivers, but about creating a safer road system, which includes safer roads, safer vehicles, safer users and speed control. “The Motor Vehicles Amendment Bill addresses many of these issues, which coupled with robust enforcement, can significantly reduce the burden of road traffic trauma, thus avoiding needless loss of human life, suffering and economic loss to the country”, said the Road Safety Network, a coalition of road safety organizations, which led the effort to get eminent citizens from across the nation to endorse the letter which highlights this grim issueto the Prime Minister.
The letter has been endorsed by Padma Vibhushan recipient and scientist, Dr Jayant Narlikar, Padma Bhushan recipient and actor Naseeruddin Shah, Sangeet NatakAkademi Award recipient and Bharatnatyam dancer Dr SuchetaBhide – Chapekar along with many ex-bureaucrats, judges, scientists, artists, authors, and industrialists of high stature, many national award winners, as well as road crash survivors and next of kin of victims. 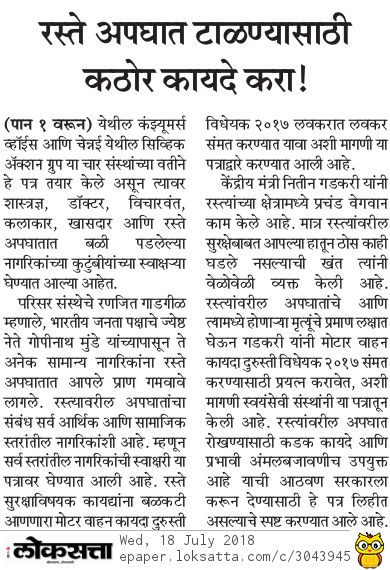